Dr. Dave Van Nuys interviews Fisher King Press author Mark Winborn, PhD about his book Deep Blues: Human Soundscapes for the Archetypal Journey on his podcast show Shrink Rap Radio.  Dr. Dave interviews a wide range of therapists, psychologists, psychiatrists, and psychoanalysts across a broad  range of subjects.  The interview can be listened to here: Winborn Interview or on ITunes. 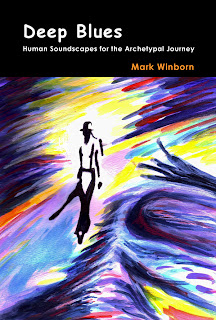 In the interview, Dr. Winborn discusses the experiences that drew him to Jungian analytic work, his interest in the blues, various themes in the book, and a brief overview of the three main schools of Analytical Psychology.

Deep Blues explores the archetypal journey of the human psyche through an examination of the blues as a musical genre. The genesis, history, and thematic patterns of the blues are examined from an archetypal perspective and various analytic theories – especially the interaction between Erich Neumann’s concept of unitary reality and the blues experience.  Mythological and shamanistic parallels are used to provide a deeper understanding of the role of the bluesman, the blues performance, and the innate healing potential of the music.  Universal aspects of human experience and transcendence are revealed through the creative medium of the blues. The atmosphere of Deep Blues is enhanced by the black and white photographs of Tom Smith which capture striking blues performances in the Maxwell Street section of Chicago.  Jungian analysts, therapists and psychoanalytic practitioners with an interest in the interaction between creative expression and human experience should find Deep Blues satisfying.
Posted by Dr. Mark Winborn at 10:23 PM No comments:

Despite the evocative title, Hauntings: Psychoanalysis and Ghostly Transmissions is not about the supernatural world which the movie, television, and fiction industries seem so preoccupied with of late.  Hauntings: Psychoanalysis and Ghostly Transmissions utilizes the notion of ghosts and haunting to show how the present is troubled by the past and by the future.  Frosh uses the image of haunting as a metaphor to explore psychoanalytically how identities, beliefs, intimacies and hatreds are transmitted across generations and between people. This book deals with the secrets that we inherit, the 'pull' of the past, and the way emotions, thoughts and impulses enter into us from others as a kind of immaterial yet real communication, both individually and collectively. The book demonstrates how past oppressions return, demanding acknowledgement and reparation, and explores how recognition and forgiveness can arise from this. Rooted in psychoanalysis, postcolonial, philosophical and psychosocial studies, Frosh addresses the question of what passes through and between human subjects and how these things structure social and psycho-political life.  Frosh addresses these issues in chapters titled: 1) Psychoanalysis as a Ghostly System, 2) Facing the Truth about Ourselves, 3) Ghostly Psychoanalysis, 4) The Evil Eye, 5) Telepathy, 6) Transmission, and 7) Forgiveness.
Being familiar with Frosh's work from previous publications, this book delivers again with crisp, insightful writing that is a rewarding read.  Hauntings is thought provoking for the practicing analyst or psychoanalytic therapist but also for the reader who is interested in the intersection of psychoanalysis and culture as well as those interested in what insights a socio-political-cultural perspective can bring to psychoanalysis.
STEPHEN FROSH is Pro-Vice-Master and Professor in the Department of Psychosocial Studies at Birkbeck College, University of London, UK. He is the author of many books and papers on psychosocial studies and on psychoanalysis, including Psychoanalysis Outside the Clinic, Hate and the Jewish Science: Anti-Semitism, Nazism and Psychoanalysis, For and Against Psychoanalysis, After Words, The Politics of Psychoanalysis and Sexual Difference and Identity Crisis. His most recent books are Feelings and A Brief Introduction to Psychoanalytic Theory.
Published January 25th, 2013 by Palgrave MacMillan.
Show more
Show less
Posted by Dr. Mark Winborn at 11:29 AM No comments:

Conclusion: "This paper puts forwards a thesis on the origin of the aesthetic/creative human capacity. In doing so, two psychoanalytic theories are first examined. One is Freud's 'sublimation' theory, the other, the Kleinian attribution of art to depressive processes. Both are felt to be unsatisfactory in that the aesthetic is viewed as a secondary phenomenon, and linked to the mastering of primitive trends.

By contrast, this paper postulates that the aesthetic experience originates at the beginning of life, and owes its nature to the earliest 'good' experiences. Since these are 'split off' they have no conceptual, relative or temporal boundaries. They are therefore assumed to be in the nature of a 'sublime infinity'.

During 'depressive' integration the infant transfers a forceful, early aesthetic experience on to a perception of a whole good/bad world. Reality is thus viewed from the vantage point of aesthetic order rather than meaningless fragmentation." (p. 149)