Posted by Dr. Mark Winborn at 7:00 AM No comments:

Judith L. Mitrani - 'Taking the Transference' vs. Desire to do Good

"In concluding, I wish to express my belief that many of us are drawn to the work of analysis, at least in part, by the desire to do some good. However, paradoxically, this may be the greatest obstacle to actually doing ‘good analytic work’ and therefore the greatest barrier to truly helping the patient. If unbridled, it may prove to be the most obstructive ‘desire'—in Bion's sense of the word—since our patients may actually need to transform us, in the safety of the transference relationship, into the ‘bad’ object that does harm. In terms of analytic technique, the analyst needs to be able to muster the wherewithal to see, hear, smell, feel and taste things from the vantage point of the patient. I have found it is of little use to give the patient the impression, in one way or another, that what he/she made of what I said or did was neither what I intended nor what I actually did or said. This tactic almost always misses the point and may even reinforce the patient's sense that his/her experiences are indeed unbearable.

Our analysands’ developmental need to house their ‘bad’ objects and unendurable experiences in us is primary. Within us, these objects and the experiences that have created them may find an opportunity for rehabilitation and transformation. For example, the experience of the ‘abandoning object’ that we become—during holidays, weekend breaks, silences and especially in the absence of our understanding in the analytic hour—may have the chance to become an experience of ‘an abandoning object who takes responsibility for having abandoned the patient’ and who, at the same time, is able to keep the patient in mind sufficiently to be able to think about how he/she might feel about having been abandoned. Most importantly, that same object may also be experienced by the patient as able to bear being ‘bad’, which in itself is ‘good'! Furthermore, when reintrojected by the patient in this modified form, the ‘bad’ object is not so ‘bad’ at all: it is human, ordinary with all the ordinary human frailties imaginable, but it is bearable. In this transformed stare, the ‘bad’ object (which is now the contained) is enhanced with a ‘container’ (the analytic object), and the patient will be well on his way towards ‘being’ a thinking and feeling individual." (p. 1102) 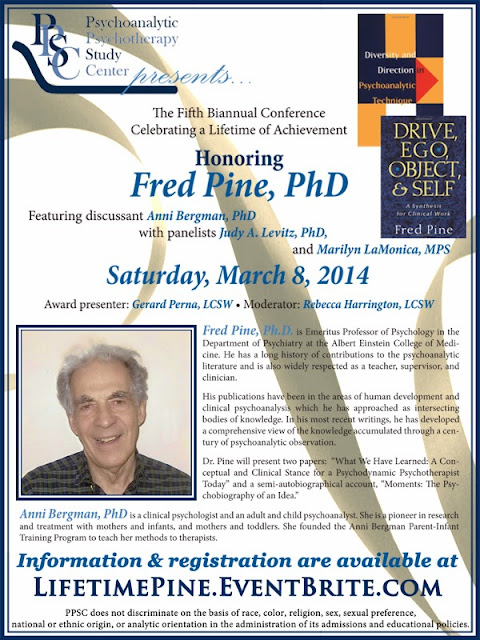 Erel Shalit - On Self and Meaning in the Cycle of Life

In old age, hearing becomes impaired and vision more blurred. For some, this provides an opportunity to open the senses to the pulsation of the soul, to hear the echoes of the sounds that arise from the depths, and perceive the reflection of the patterns that take shape under the sea.
This may be the transparency and the invisibility of not being seen by others, and the fear of being run over by the phenomena, the appearances of this world. However, as has been mentioned, it entails exchanging the reality-oriented ego-vision for the inward gaze—like Oedipus upon tearing out his eyes, and the seer Tiresias, or Samson. When blinded to this world of appearance, the inner world of transparent, invisible psychic substance may open up, to be sighted. This change in the ego-Self relationship marks a release of the ego from the persona of social roles. It is the invisibility of allowing oneself to be a beggar, a wanderer, or an old fool—not in the social, but in the psychological sense.
In order to attain a sense of integrity in old life, rather than suffer severe despair, Erikson emphasizes the importance of reflection. The reflective instinct is specifically human, and determines “[t]he richness of the human psyche and its essential character,” says Jung. Reflexio, which
means ‘bending back,’ “is a turning inwards, with the result that, instead of an instinctive action, there ensues ... reflection or deliberation.”
“What youth found and must find outside,” says Jung, “the man of life’s afternoon must find within himself.” Jung calls reflection “the cultural instinct par excellence.” Reflection on one’s life is instrumental at every developmental stage, unless it takes precedence over living one’s life. In
old age, the proportions alter, so that reflection on one’s life becomes at least as important as merely living it.
When cut off from one’s inner depths, the personality shrinks as the ego dries up and becomes limited. A reflective state of mind, however, enables the depths to be reflected in the mirror of one’s Self and soul. Henry Miller tells us in Colossus of Maroussi that he did not know the meaning of
peace until he visited the principal sanctuary of Asclepius at Epidaurus, where dream incubation began around 600 BCE. In the intense stillness and the great peace at Epidaurus “I heard the heart of the world beat. I know what the cure is: it is to give up, to relinquish, to surrender, so that our little hearts may beat in unison with the great heart of the world.” Henry Miller makes it clear that Epidaurus, principally, is an internal space, “the real place is in the heart, in every man’s heart, if he will but stop and search it.”
Reflection and imagination constitute the intangible substance of soul, which Hillman suggests refers “to that unknown component which makes meaning possible,” and which he imagines “like a reflection in a flowing mirror.” (p. 177-8)

Erel Shalit (2011) The Cycle of Life: Themes and Tales of the Journey, Fisher King Press.

For the first time, The Collected Works of C. G. Jung will now available in English as individual e-books and as a complete digital set. Both the individual volumes and the set are fully searchable.
http://www.amazon.com/The-Collected-Works-C-G-Jung-ebook/dp/B00HQPHACS/ref=sr_1_6?ie=UTF8&qid=1391194095&sr=8-6&keywords=collected+works+of+cg+jung
Posted by Dr. Mark Winborn at 10:16 PM No comments: